영희 Young-hee, also known as The Doll, is a large motion-sensing animatronic doll that was used in the 33rd Squid Game, most prominently during "Red Light, Green Light" and was also featured in the background during "Squid Game". Her eyes were able to scan the movement of players quickly to see if any of the players were moving after hearing "red light," all players who did so were eliminated, along with any players who didn't make it to the end in time.

Based on the Korean textbook character of the same name, Young-hee resembles a young girl with black hair in low short pigtails with faded purple beads and a barrette in her hair that resembles the Squid Game symbol that is the same color as her beads. A yellow collared T-shirt, orange pinafore, knee high white socks and black shoes. She has black eyes which the pupils turn red when detecting a player moving on red light. During the "Red Light, Green Light" game, she repeatedly says (무궁화꽃이 피았습니다 Mugunghwa-kkochi pieot-seumnida?, which roughly translates to "The Mugungha Flower has bloomed") – referring to the hibiscus syriacus, the national flower of South Korea.

During her role in the 33rd Squid Game, 255 players were eliminated, which was mainly due to the mass panic following the deaths of two players.

Young-hee was positioned at one end of the field, the other players were given the task of getting to her side of the field within a set time limit, but they can only move when Young-hee's back was turned. If any players were caught moving when she turns around, they were eliminated from the game and shot dead by unseen snipers. Any players who failed to reach Young-hee's side of the field in time were also eliminated. Young-hee adjusts the tone of her song slightly each time, which has caught several players off-guard over the years.

Young-hee was responsible for 255 deaths, the largest death count of the games that year. This was mainly due to the mass panic amongst the players following the deaths of Player 324 and Player 250, with Young-hee's sensors detecting all their movements, which ultimately resulted in the deaths of hundreds of players. Some people such as Cho Sang-woo and Kang Sae-byeok were able to exploit her sensors by hiding behind others which therefore made it more difficult for Young-hee to notice them. After this, the game and Young-hee's movement were paused briefly as the instructor of the games repeated the rules of the game twice to the traumatized surviving players, 201 of which completed the game but the rest were killed by either being detected by Young-hee or failing to reach the end in time.

Role after the 33rd Squid Game

Following the 33rd Squid Game, Young-hee became accompanied in the games by her "boyfriend" Cheol-su.

Young-hee is voiced in the Korean sub by Chantal, and is voiced by Reagan To in the English dub.

Young-hee is based on the character of the same name who appeared on the covers of Korean textbooks Chul-soo and Young-hee in the 1970s and 1980s, and her hairstyle was inspired by Hwang Dong-hyuk's daughter's.[1] HoYeon Jung (who played Kang Sae-byeok) explained the doll's origins in a virtual appearance on The Tonight Show Starring Jimmy Fallon.[2][3] The Netflix Twitter account confirmed the doll's name is Young-hee in a tweet discussing Squid Game Profile Icons.[4] Her singsongs in Korean, "Mugunghwa Flower has Blossomed", refers to the hibiscus syriacus, the national flower of South Korea. The use of this familiar character was meant to juxtapose memories of childhood and unsettling fear in the players.

Young-hee has achieved worldwide popularity following the success of Squid Game, and has been described as the mascot of the series.[5] Due to her popularity, she has been used in merchandising, with South Korean toy designer Hyun-Seung Rim (aka twelveDot) unleashing heads of the doll, albeit in a smaller size, which have been given to various members of the cast and will be available for the public to buy at a later date.[6] A Young-hee alarm clock has been made, which fires soft pellets at its owner if they're not awake when their alarm goes of.[7] Additionally, various plushies and figures of Young-hee have been made.[8][9] An officially licenced Young-hee Vinyl Figure was released in January 2022.[10] On October 1st 2021, a humorous fake interview with Young-hee (whose actor is named "Chantal" in the interview) was posted on Vulture.[11][12]

The doll used for Young-hee is a real artifact residing in a horse carriage village in Jincheon County in Chungcheongbuk-do, South Korea. The doll was built in October 2016. Hwang borrowed the doll for the "Red Light, Green Light" scene in the episode of the same name and the "Squid Game" scene in One Lucky Day. It has since been returned to the village. However, it was removed from the public in late September 2021 due to the massive popularity of both the doll and the series.

To celebrate Halloween in October 2021, a giant replica of Young-hee was placed in Sydney, Australia, accompanied by two people roleplaying as workers.[13] Similar replicas of the doll have also been featured across the world, including an appearance at the Birmingham New Street Station and Manchester Trafford Centre in the United Kingdom on November 6, 2021. In the Philippines, a replica has been installed as a promotional stunt that detects jaywalkers at zebra crossings, and turns its eyes red when it detects one.[14]

In June 2022, it was revealed by Hwang Dong-hyuk that Young-hee has a boyfriend named Cheol-su, who will be featured alongside Young-hee in the second season. He teased "a romantic duet from the couple right before they give you that deadly look".[15]

The doll facing away from the players, with its hand on the tree

The doll turning around to face the players, moments before detecting their movements

The doll's sensors tracking the movements of panicked players

The doll deactivated during the final game

Promotional image of the doll looking towards the camera, during the scene where panicked players attempt to escape

The doll used for Young-hee's scenes in the series.

A replica of Young-hee in Sydney, Australia.

A replica of Young-hee in Manchester Trafford Centre, United Kingdom. 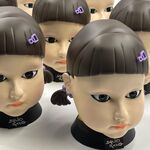 Replica heads of Young-hee, which have been given to several cast members. 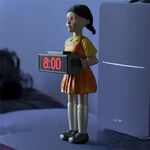 The alarm clock of Young-hee.

The Young-hee Vinyl Figure, which was released in January 2022.