—The Salesman to players of the Squid Games in Red Light, Green Light

The Salesman is a businessman who has worked as a recruiter for the Squid Games since the 33rd Squid Game in 2020. His role is to recruit players by playing Ddakji with them, and later giving them a card if they win.

The salesman is the first point of contact between the players and the organizers of the games. With his briefcase of cash and ddakji envelopes, he lures players in by offering them an easy way to make money. After several rounds of ddakji, he gives players a card with a logo and a phone number for the players to call for the chance to play more games and make money. If players wish to participate and call the number, the salesman instructs them to state their name and birthdate before allowing them to play.

During the first episode, while he's talking to Gi-hun, he is calm, relaxed and polite. He seems relaxed the majority of the time he is on screen, even after losing the game. The only time he loses his relaxed demeanor is when Gi-hun points his lighter gun at him, believing it to be real. After seeing Gi-hun in 2021, he seems to be a bit more sneaky, and even gives Gi-hun a sneaky smirk while leaving.

The salesman is a former staff member from the Squid Games who earned the trust of the game's creator, Oh Il-nam, over time. After raising his position, the salesman was given the opportunity to work outside the game in the "real world", and began to recruit players for the 33rd Squid Game in 2020, beginning with Moon Jung-ho and ending with Player 456.[1]

After 455 players were recruited for the 33rd Squid Game, the salesman approached Seong Gi-hun on the subway. He asked to play Ddakji with him where the winner would receive ₩100,000. Gi-hun reluctantly agreed to play. Gi-hun failed the first round but the salesman succeeded. He asked Gi-hun if he had any money where Gi-hun stated he didn't so he slapped him saying that he would take away ₩100,000 for each slap. Gi-hun decided to keep playing only to lose and get slapped in the face several times until winning. He tried to get revenge on the salesman by trying to slap him but the salesman blocked him and gave him the prize money.

The Salesman is portrayed by Gong Yoo who is famously known for playing Seok Woo from Train to Busan and Kim Shin from Goblin.

The Salesman smiling while holding his cards 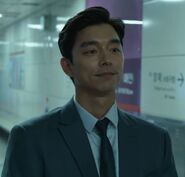 The Salesman offering to drop 100,000 won per slap