Brown
So he went right.

—Player 453 after she accidently guided Player 021 to the wrong glass panel, leading to his death

Player 453 was in heavy debt and chose to enter a high-risk competition to win money. After waking up in a large room with 455 other people, she signed a contract and took her photo. She managed to survive the first game, Red Light, Green Light, after most of the contestants had been wiped out. Afterwards, like everyone else, she was shaken by the deaths of the contestants, and went on her knee begging for the staff to spare her life. A vote was held if the game should continue, and she voted yes after knowing how much money she could win, but the majority voted no. However, those who were willing to return could, and she returned, along with most of the other players.

She managed to survive the second game, Sugar Honeycombs. She was seen in Tug of War, as a member of Team 8. It is known that she was in Do Jung-soo's team. He passed that game. In Marbles, she beat her opponent, Player 085 in the fourth game Marbles, and survived until the fifth game, Glass Stepping Stones. For the game, she chose the number 5, which meant she would be the fifth to go. When the player in front of her, Player 021, asked what the order was, and she said she could not remember. However, while Player 244 told her the truth, Player 151 told her a lie, which she believed and told 021, causing him to fall off.

After 021 fell, she was forced to figure out the glass panels herself, but she failed, causing her to fall to her death.

Many players, including Player 453, looking up.

Many players, including Player 453, begging to be released.

Player 453 standing at the front during voting. 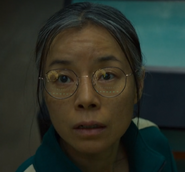 Player 453 debating whether she should vote to leave or to stay.

Player 453, next to Seong Gi-hun, disappointed about the game's discontinuation. 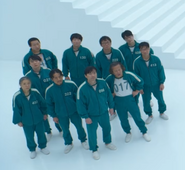 Player 453 standing with her team after Tug of War.

Player 453 trying to persuade someone to partner with her for the fourth game.

Player 453 standing next to Han Mi-nyeo watching Jung Min-tae dash for a number.

Several players, including Player 453, rushing to pick a number. 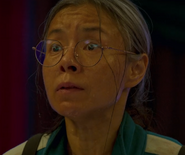