Screamed as she sees the blood on her face, causing her to get shot by the doll And made everyone panic

Brown
Player 306 was a contestant in the 33rd Squid Game in 2020. She was the third player to be eliminated from the game.

Player 306 was in heavy debt and chose to enter the Squid Game to win money. After waking up in a large room with 455 other people, she signed a contract and took her photo.

When the doll turned around and called out "green light", Players 324 and 250 ran forward. When the doll called "red light", Player 324 was unable to stop in time and lost his balance, resulting in him being eliminated and shot dead. Upon realizing what had just happened, Player 250 attempted to flee before being shot himself, his blood splattering across Player 306's face. The horror of this caused Player 306 to shriek in panic, resulting in her too being shot dead. This also caused many other players to attempt to escape the game arena, however all who did so were immediately shot dead like Player 306.

Several players, including Player 306, looking at the doll at the end of the field.

Many players, including Player 306, getting ready for Red Light, Green Light. 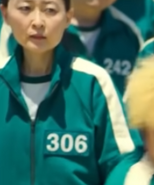 Player 306 shouting as she sees the blood