Kang Sae-byeok (Korean/Chosŏn'gŭl: 강새벽, Gang Sae-byeog?), also known as Player 067, was a contestant in the 33rd Squid Game in 2020,[2][3] and one of the finalists of the competition. She was a North Korean defector, and fled the country with her parents and younger brother, leading to her father's death and her mother getting caught. A pickpocket, Sae-byeok entered the Squid Game to get enough money to reunite her family.

During the Squid Game, Sae-byeok joined an alliance with several players, including Seong Gi-hun, Cho Sang-woo, Oh Il-nam, Ali Abdul and Ji-yeong. She survived the first four games, and managed to complete the fifth game but was mortally injured by the exploding glass at the end. After trusting Gi-hun to take care of her brother, she was stabbed in the neck by Sang-woo prior to the start of the sixth game.

Kang Sae-byeok is very stoic and usually barely expresses emotions. She is determined during the Squid Game and kept to herself in the first three games. She is also level-headed and can stay calm in dire situations. When Ji-yeong sacrificed herself so Sae-byeok could advance, Sae-byeok is shown crying. She also warmed up to Gi-hun and later trusted him for his promise to take care of her little brother before she died.

Kang Sae-byeok was born in North Hamgyong Province, North Korea. She is the second of three children. When she was young, her older brother and grandparents died from a plague. She and her family defected from North Korea but only she and her younger brother Kang Cheol, her father was killed during the attempted escape, and her mother was captured and sent back. Her brother stayed in a shelter, while Sae-byeok worked as a pickpocket and attempted to save enough money to buy a home for her brother and bring her mother to South Korea.[4]

Sae-byeok originally worked with gangster Jang Deok-su, but decided to "go independent", creating animosity between them.[2] She agreed to enter the Squid Game to compete for the prize money to pay a broker and bring her mother to South Korea and get her brother out of the shelter. After surviving the first round, she is among the minority of players who vote to continue the Games despite the risk of death, and she later voluntarily returns when the Squid Game resume.[5] She finds herself targeted by Deok-su, who is also a contestant, and joins an alliance with Seong Gi-hun, Cho Sang-woo, and others in part to gain protection from him.[6][7]

Sae-byeok displays her cunningness throughout the games, at one point sneaking into a bathroom air duct to spy on the Games organizers and obtain information about upcoming competitions.[6] She eventually befriends Ji-yeong, who sacrifices herself during a game of Marbles to allow Sae-byeok to advance to the next round along with the others who had survived. Her and Ji-yeong's short encounter leads to a deep bond to form between the two of them.[4] Sae-byeok also becomes friends with Gi-hun and they both help each other through the games. Sae-byeok is one of the last three survivors of the Games, along with Gi-hun and Sang-woo, though she suffers a serious injury when she is stabbed in the abdomen by a large glass shard during an explosion of glass in the fifth game.[8][9]

Sae-byeok dies due to Cho Sang-woo stabbing her in the neck while Gi-hun was at the door, begging for emergency because she was losing a lot of blood from being stabbed by a glass shard after the fifth game. She was later cremated inside a coffin like all other deceased bodies of people present in the game premises. 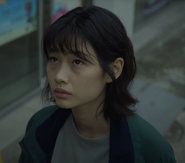 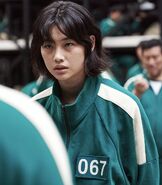 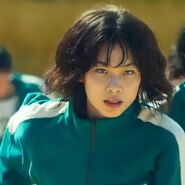 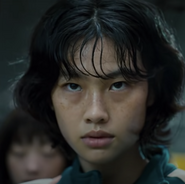 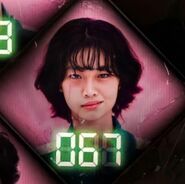 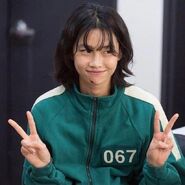