Brown
You wanna wind up dead, buddy? Get that asshole to stop praying.

Prior to his entry, he was a gangster and was heavy in debt. Throughout the games, he is shown to be aggressive and hostile towards other players. When the games begin he recruits several members to his team. He starts a riot, leading to 27 player's deaths. He had a brief sexual relationship with Han Mi-nyeo, before betraying her in favor of more physically fit men in Tug of War. He dies in the Glass Stepping Stones, in a murder-suicide with Han Mi-Nyeo, causing his elimination from the games.

Deok-su is a violent, sadistic, and condescending man. He shows little to no remorse or compassion as he progress through the Games’ rounds, assaulting and sometimes killing other contestants not only to gain a strategic advantage, but also out of personal spite.[3][4]

Despite his tough exterior, Deok-su is actually a coward inside, as shown as he becomes soft whenever his life is threatened in Red Light, Green Light and VIPS. He is hypocritical as well, threatening the other plays for not throwing themselves in the fifth game but refusing to do so himself.

At some point in his life, Deok-su falls into bad standings with his criminal boss in Incheon and accumulates large gambling debts with loan sharks from the Philippines. He agrees to enter the Squid Game to escape those pursuing him and to win enough money to pay his debts. At one point he plots to assemble a crew to infiltrate the Games and steal the prize money, but his reputation is so badly damaged that he is unable to do so.[5]

Deok-su forms and leads a gang with several other contestants, including Byeong-gi, Player 278, and Han Mi-nyeo. He repeatedly tries to assault Kang Sae-byeok, a contestant who once worked for him prior to the Squid Game, and at one point his gang starts a nighttime brawl that results in the deaths of several players.[3]

Deok-su initially includes Mi-nyeo in his gang after she helps him survive one of the rounds, and they have a brief sexual relationship, but he later expels her from the group and replaces her with physically stronger men after he learns from Byeong-gi that the next round is a game of tug of war.[3]

For the fourth game, Marbles, Deok-su teams up with Player 278. Player 278 initially starts winning, but just as he's about to beat him, Deok-su demands to switch the game, which a guard approves. He ends up winning barely out of luck, which causes Deok-su to blaringly cheer. Player 278, much to his despair, tries to escape, but runs into a dead end and gets gunned down as he curses at the guards.

Deok-su survives until the fifth game, Glass Stepping Stones, during which he refuses to progress at one point unless other players move ahead of him. Mi-nyeo, who had earlier vowed to kill Deok-su if he betrayed her, makes good on her word by grabbing Deok-su around the waist. Deok-su begs her to let him go, but Mi-nyeo mocks him and pulls them both off the bridge in a murder-suicide, causing them to fall to their deaths.[4]

Deok-su moments before killing his subordinate 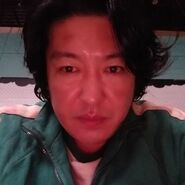